In 2004, the William J. Clinton Presidential Center opened and ushered in a new era of invigoration for Little Rock. It, along with the newly-renovated Robinson Center, the city’s state-of-the-art performance hall, bookend a thriving downtown district where eclectic shops and restaurants thrive.

Located along the Arkansas River and the 33-acre Riverfront Park is Little Rock’s River Market District. This district is a hotbed of activity with visitors and locals alike flocking to the River Market Entertainment District (RMED). RMED is a three-block stretch of President Clinton Avenue where alcoholic drinks can be taken outside of the bars and onto the sidewalks. Here and throughout the greater Downtown and River Market districts you’ll find some of Little Rock’s best restaurants. From inspired farm-to-fork dishes and traditional southern specialties, Little Rock’s dining scene has something to fit every craving.

Many of Little Rock’s most exciting attractions are located just steps from a Rock Region Metro Streetcar stop. This free mode of transportation consists of two intersecting streetcar lines. The Green Line completes a circuit of downtown Little Rock while the Blue Line ferries riders over the Arkansas River to North Little Rock and back.

The streetcar system acts as a gateway to many of Little Rock’s signature attractions including the world headquarters of Heifer International — where the issues of global hunger and poverty are fought on a daily basis — and the William J. Clinton Presidential Center — where guests can view political memorabilia and explore an exact replica of the Oval Office. The William E. “Bill” Clark Presidential Park Wetlands is designed to showcase wildlife and river life in a restored wetlands habitat for the education and enjoyment of millions of national and international visitors to the Clinton Presidential Park and Library. The nearby Witt Stephens Jr. Central Arkansas Nature Center gives Arkansans of all ages the ability to come face-to-face with nature, while the Historic Arkansas Museum allows visitors to explore the oldest buildings in Little Rock while getting a feel for the lives of the state’s first settlers.

No matter what part of Little Rock you visit, you’ll never be far from the city’s most natural resource: the abundant outdoor spaces that can be found throughout the city. From the 17-mile Arkansas River Trail, a biking or hiking lover’s dream, to the rocking waters of the Arkansas and Little Maumelle Rivers, Little Rock has almost endless outdoor spaces to explore. Whether you’re a mountain biking pro or a first-time paddler, Little Rock’s parks and natural landscapes can be the setting for lifelong memories.

On your adventures, be sure to look out for La Petite Roche, the small rock that gave Little Rock its name. You’ll find it nestled in Riverfront Park at the Junction Bridge, and among the artwork at the Vogel Schwartz Sculpture Garden, where more than 100 statues line pathways and plazas along the riverbank. Further west, see if you can spot the Big Dam Bridge, North America’s longest pedestrian-and-bicycle-intended bridge. It’s hard to miss.

It won’t take long for you to see why Outside Magazine included Little Rock in their “12 Best Places to Live in 2019,” why Trivago.com named it a Top Ten “U.S. Best Value Destination” for three consecutive years, why both Southern Living and Food & Wine magazine listed it as one of “15 Southern Cities All Food Lovers Should Visit Now,” and why the city was just named Foodie Flashpacker’s “Next Hottest Foodie Destination.”

Discover the pleasant surprise of Little Rock, and see why the locals say, “Life is Better with a Southern Accent.” 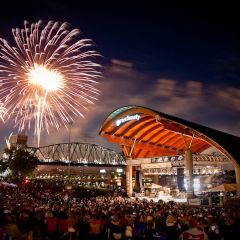